Mondelēz International, makers of the UK’s favourite treats including Cadbury Dairy Milk, Green & Black’s, BelVita, Maynard’s Bassetts and OREO has switched to renewable electricity for all six of its production sites across the UK.

The snacking leader is switching to purchased 100% renewable electricity across six sites including their Chirk production site where Mondelēz International processes all it’s cocoa beans to make cocoa crumb. The crumb is then sent to the iconic Bournville factory, the heart and home of Cadbury in the UK, used in the Bournville RDQ centre to create products of the future.

The switch also includes Sheffield factory the home of Maynards Bassetts, Minworth, Marlbrook and Crediton. Mondelēz International has signed a contract to provide all six production sites with sustainable electricity that has been generated solely in Great Britain.

The transition to 100% renewable electricity sourced within the UK for these production sites means that Mondelēz International can offset the equivalent of 2,900 people’s annual CO2 emissions. This is calculated using the UK government’s findings that the average Brit emits around seven tonnes of CO2 annually. The UK business now joins other Mondelez production sites in using 100% renewable electricity including Mexico, Australia and New Zealand.

This move builds on previous progress by the company who have already achieved a reduction of 20% C02 emissions across production sites by the end of 2020. This was made possible by an increased use of renewable electricity globally, moving from just 8% to 23% of total electricity used. This increase played a key part in enabling the company to achieve a significant reduction in CO2 emissions – by 147,109 tonnes, from 1,336,793 tonnes in 2019 to 1,189,684 tonnes in 2020. This annual reduction in CO2 is equivalent to taking 31,993 cars off the road for one year.

In February 2020 Mondelēz International announced a new goal to reduce end to end CO2 emissions by 10% by 2025. This new goal is a science based target (SBTI) and a core part of the company’s Snacking Made Right strategy to create a sustainable future for both people and planet.

Louise Stigant, UK Managing Director, Mondelēz International, said: “Using 100% renewable electricity, that is also generated here, across our six production sites is a huge step towards reducing our carbon emissions here in the UK, whilst supporting our global target and our mission to make our snacks in the right way.” 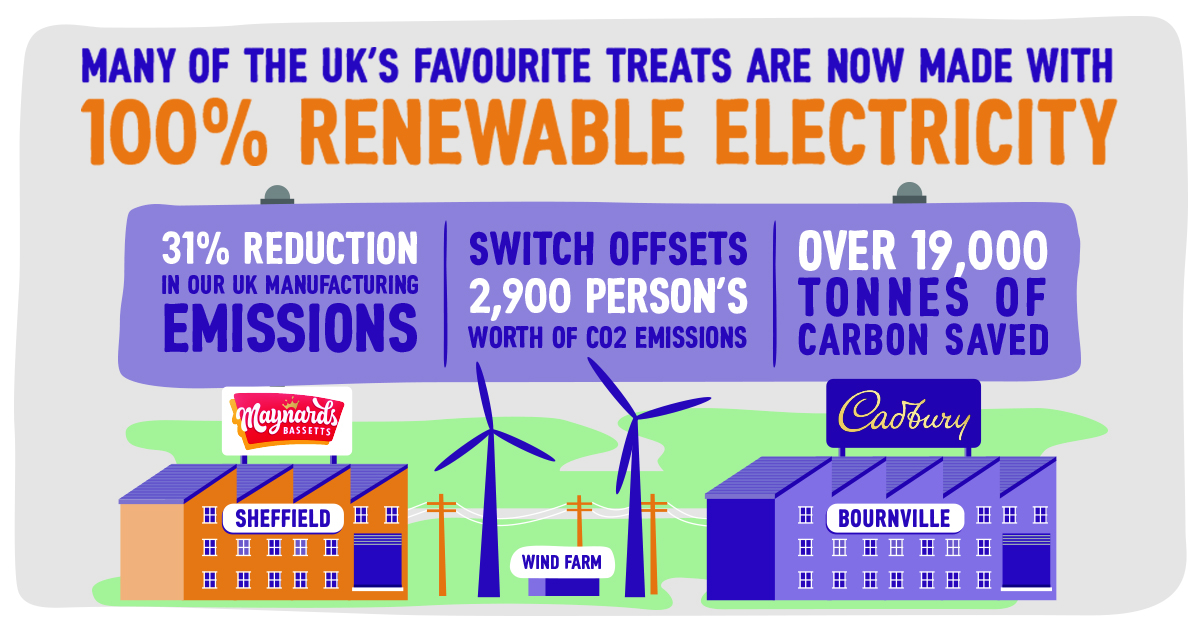