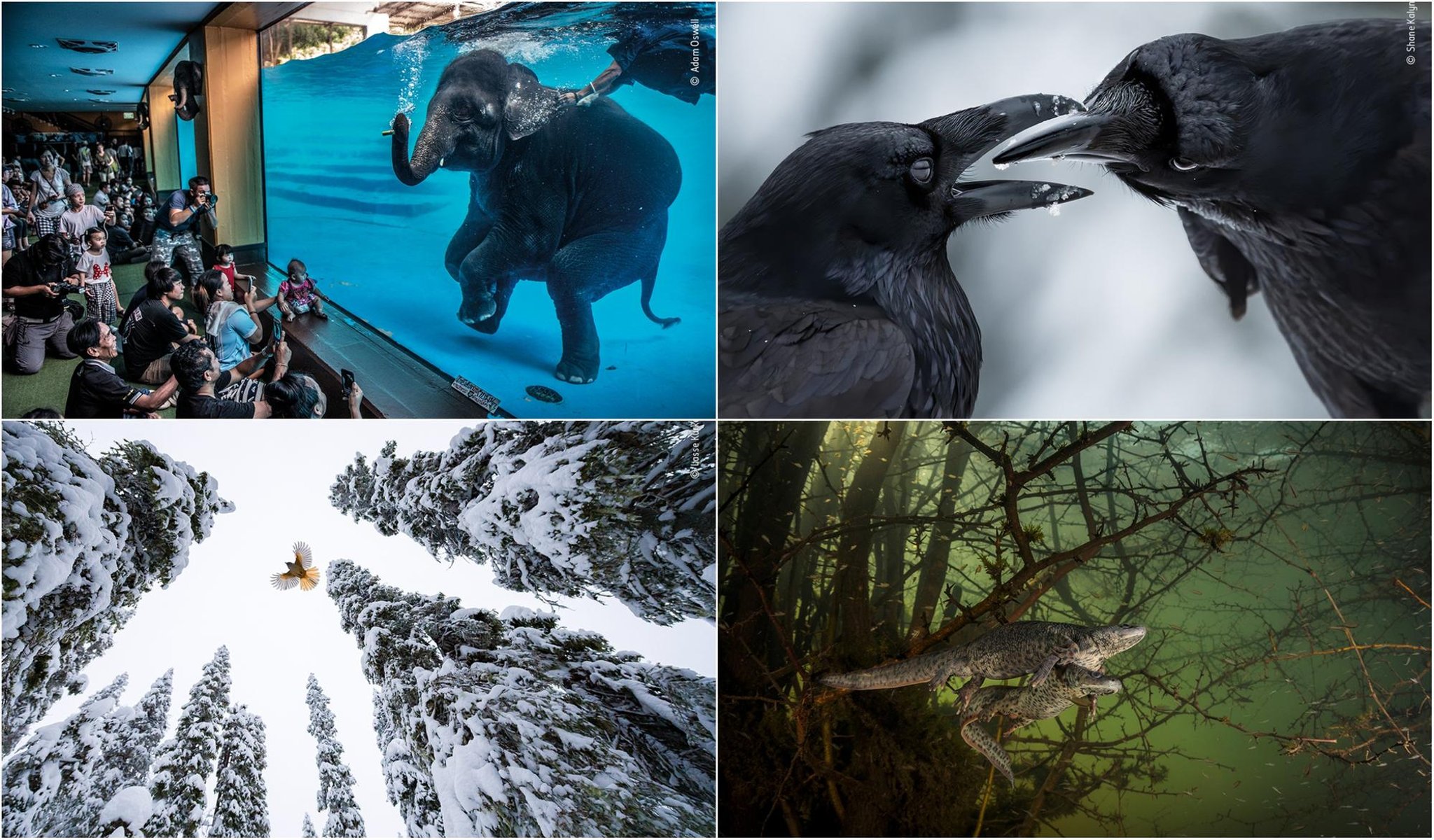 French underwater photographer and biologist Laurent Ballesta’s shot of a rare underwater spawning that only takes place around a full moon once a year has been named as the overall winner.

Here are some more of the winning images from this year’s competition, which will be exhibited at the Natural History Museum, London, from Friday (October 15).

Adam Oswell (Australia) draws attention to zoo visitors watching a young elephant perform under water. Although this performance was promoted as educational and as exercise for the elephants, Adam was disturbed by this scene. Organisations concerned with the welfare of captive elephants view performances like these as exploitative because they encourage unnatural behaviour.

Zack Clothier (USA) discovers a grizzly bear has taken an interest in his camera trap. Zack decided these bull elk remains were an ideal spot to set a camera trap. Returning to the scene was challenging. Zack bridged gushing meltwater with fallen trees, only to find his setup trashed. This was the last frame captured on the camera. Grizzlies, a subspecies of brown bears, spend up to seven months in torpor – a light form of hibernation. Emerging in spring, they are hungry and consume a wide variety of food, including mammals.

Alex Mustard (UK) finds a ghost pipefish hiding among the arms of a feather star. Alex had always wanted to capture this image of a juvenile ghost pipefish but usually only found darker adults on matching feather stars. His image conveys the confusion a predator would likely face when encountering this kaleidoscope of colour and pattern. The juvenile’s loud colours signify that it landed on the coral reef in the past 24 hours. In a day or two, its colour pattern will change, enabling it to blend in with the feather star.

Gil Wizen (Israel/Canada) finds a fishing spider stretching out silk from its spinnerets to weave into its egg sac. Gil discovered this spider under loose bark. Any disturbance might have caused the spider to abandon its project, so he took great care. ‘The action of the spinnerets reminded me of the movement of human fingers when weaving,’ Gil says. These spiders are common in wetlands and temperate forests of eastern North America. More than 750 eggs have been recorded in a single sac. Fishing spiders carry their egg sacs with them until the eggs hatch and the spiderlings disperse.

These are the second-hand cars that have seen values rise by up to 50% since last year, plus those that are rising most slowly The Star…

An ultra-stylish house in Sheffield with an interior designed finish and dating back to 1897 is for sale at £325,000. The Star…

You can choose from an historic house hiding secrets within its walls, to a barn all ready for conversion. The Star…

A charming one bed brick end terrace house in a highly sought-after Sheffield area is for sale at £180,000. The Star…

Sheffield City Council has responded after the Old Town Hall failed to sell at auction. The Star…